Presets are a handy DJ-MediaTools feature, giving the possibility to save and re-use the album settings for use on other sites or, for example, to exchange them.

The possibility of import/export is an entirely new and most important feature introduced in this update. The ability to download and upload presets in the form of a ".json" file, allows you to transfer and share your settings with other users.

Below you can see the new "Import preset" section, with the possibility to choose the file from your computer and import (upload) it to DJ-MediaTools.

The "Download" button will appear in the options after creating a new preset and saving it.

Find out more about presets. How to create, manage, and how to use them: Presets - predefined album settings.

How to import/export presets in DJ-MediaTools?

We have prepared one "Preset" as an example. It is available in the presets tab in the DJ-MediaTools component.

You can also check a tutorial showing you how to prepare an album configuration that presents cards. And the configuration shown is just the same as in the "Cards" preset mentioned earlier.

The final effect of the example album looks like this:

See how to build card-like gallery with DJ-MediaTools

There is a specific hierarchy in the DJ-MediaTools component due to several possible item configurations: global settings, album settings, and settings from the menu and module level. It didn't always work correctly before, so we made some fixes to keep everything consistent and working perfectly in this update.

Settings can contain "inherit" and empty input, which means that the given value will be taken from general settings.

The hierarchy of inheriting from lowest to highest priority is: 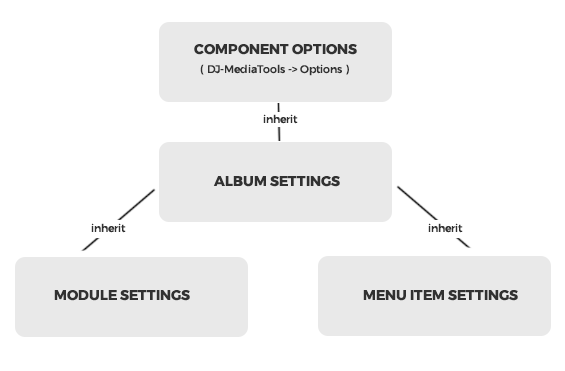 Learn more about the inheritance (hierarchy) of settings in DJ-MediaTools

The latest DJ-MediaTools update brings also some other improvements:

DJ-MediaTools updated with some improvements and bug fixes